Updates on the planning process and public engagement

Dutchtown South Community Corporation has been working on forming a Development Review Committee of residents and stakeholders. The group formed is a 13 seat committee, with 9 for residents/ stakeholders and 4 for local CIDs and neighborhood associations. We had 15 residents/stakeholders (employees at local businesses, property owners, engaged nearby residents) apply for the 9 seats. Almost everyone had participated in a previous resident training session or were active and known in this community. Each applicant had an interview with DSCC staff and guest reviewers from the local community development field. We were very lucky to have 9 guest reviewers who came to a variety of the interviews including Cristina Garmendia, Jenny Connelly-Bowen, Gary Newcomer, Catherine Hammacher, Jonathan Roper, Claire Ripple, Dwayne James, Jessica Payne and Jay Watson. 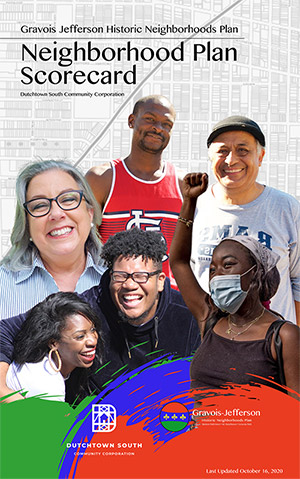 The committee members selected are:

As far as the process for project review committee we are working with elected officials, the Planning Department and several other city departments to make the Gravois-Jefferson Plan a model for attracting the development we want from the private sector. We have created a specialized Neighborhood Plan Scorecard that outlines the relevant recommendations from the plan in a more distilled tool that can be used during project planning and review.  We have modeled it after a group from the Twin Cities.

Stay tuned for more information about the committee and the review process in 2021.

The Gravois-Jefferson Historic Neighborhoods Planning initiative is a partnership between Rise Community Development, Dutchtown South Community Corporation in cooperation with members of the Board of Alderman, the City of St. Louis Planning department, and funding from Lutheran Development Group, Incarnate Word Foundation, and Deaconess Foundation.

To get involved, put your email in below to get email updates or click here to view the schedule and attend a community meeting.

Translate »
Help us out with a quick survey!

Public input is needed to make our plan representative of the community’s needs.

Click here to fill out a quick public input survey!